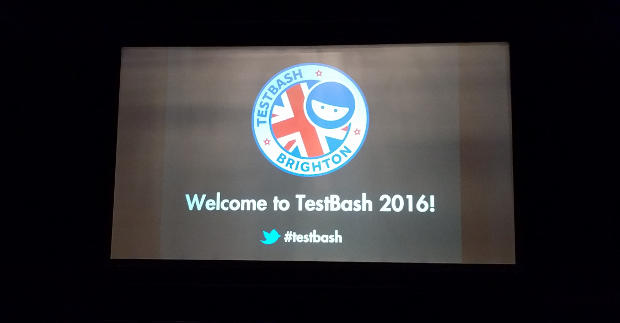 I am just back home in Hamburg from one of the greatest testing conferences in the world which was taking place this week in Brighton /England and I am talking about Testbash. Last year I already had the chance to attend the conference and to provide a workshop about mobile testing. This year I was in the luxury situation of just listening to all the great speakers which were talking about testing. If you don’t know testbash or have never attend the conference you should really try to get there once. Testbash is not like any other software testing conferences out there. Testbash is all about the people and the testing community. There are no big sponsor booths, trying to sell you any kind of products you may not need, no the breaks are for you to meet and to talk to other software testers. The coffee breaks are used to make new contacts, to share experiences and to make new friends. However, there are not just the breaks to talk to people, there are so many pre testbash meetups at pubs, restaurants or in any other places where you can meet the conference people. Like always, the conference started on Thursday with many workshops provided by people like Richard Bradshaw, Lisa Crispin, Abby Bangser, Martin Hynie, Ioana Serban, Christina Ohanian, Nicola Sedgwick, Ash Winter and many more. As already mentioned there are meetups around the conference and after all the workshops most of the people where meeting at Ohso Social bar directly at the beach of Brighton. At this event I had the chance to meet many testing people I knew before just from twitter like Dan Billing, Ash Winter and many others. It is hard to write about the spirit that is around those meetups but it is like going to a class reunion but where just the cool kids are :).

After a really short night the conference day started with lean coffee, which I missed due to the pre testbash meetup, but I was right in time to find a nice spot in the second row of the Brighton Dome to listen to all the talks. This year many great speakers where in the lineup as well as new speakers who gave their first conference speech.

One of the cool things about testbash is, that there is only 1 track. So you don’t have to decide in which talk to go to. Just sit down, relax and get inspired. My favorite talks where the talks from Katrina Clokie, Patrick Prill, Nicola Sedgqick, Michael Wansley and Nicola Owen.

If you missed the testbash, don’t worry all the talks got recorded and will be soon available at the dojo at ministryoftesting.com.

During the conference I had the chance to meet more software testing experts from around the world and to meet them in real life. I really loved to talk to Lisa Crispin, Nicola Owen, Katrina Clokie, Vernon Richards, Dan Billing, Emma Armstrong and many more.

After the talks there is another great format happening, the 99 seconds talks. This is the time for the attendees to talk about any kind of topic in 99 seconds and to try to speak in front of many people. And the 99 seconds proved that it can kickstart a speaking career. For example, Dan Billing, Richard Bradshaw and Nicola Owen started with 99 seconds talks and now they are speaking at other conferences too or provide workshops already!

After the conference most of the people went to another pub for the post testbash meetup 🙂 to have more fun with some beers which was an awesome evening too. If you missed the conference, have a look at the embedded twitter timeline from #testbash to get an impression about the event.

Some photos I took during the event.

Testbash 2017 is already on my conference schedule for next year, I hope to see you there, too.