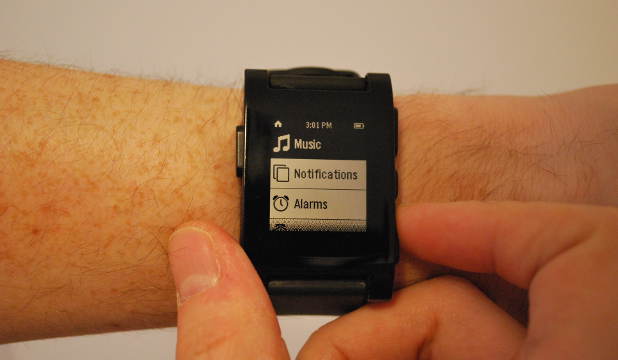 This is the third post of my smartwatch app testing series and in this post I will write about Pebble OS. In the previous posts I wrote about Tizen OS and watch OS. I think we all know the Pebble watches from their success on the Kickstarter campaign in 2012. In this campaign the company Pebble Technology Corporation raised more than $10 million dollar which was the best Kickstarter project at that time. With the raised money the company was able to produce the first Pebble watch. Since then, Pebble launched different versions of their smartwatches and the concept is different compared to Tizen, watch OS or Android Wear. Pebble’s characteristic is the low power e-ink display with either 2 or 64 colors. Right after the start of the first Pebble and the Pebble OS, this platform has become more and more attractive in the smartwatch business and therefore it is important to know the platform details in order to develop or to test for this system.

As a first starting point I recommend to take a look at the Pebble developer page, where all required information like the development SDK, tutorials, developer guide and the SDK documentation is listed. Also worth looking at are the mobile app SDKs for Android and iOS. Pebble watch apps or watch faces can either be written in C, Java or JavaScript.

Next to the development guidelines, the design and interaction guidelines are important, too. The latest version of these guidelines can be found here.

Until now, Pebble has released three smartwatches. The Pebble Classic with its 2 color low power e-ink LCD display, the Pebble Time with 64 color display and the Pebble Time Round which is based on the same platform as the Pebble Time but with focus on style. So let’s have a closer look at the Pebble watches. All watch types offer basically three input types:

As you can see, the Pebble watches are not offering a touchscreen to interact with the watch instead buttons are used. The Pebble Classic has 4 buttons to use and navigate through the installed apps and watch faces as well as inside the operating system. The button on the left side is used for going back. The button located in the middle on the right side is used for selecting and executing a command. The top and bottom left buttons are used to navigate up and down within the UI.

The watch offers a 3-axis accelerometer with gesture detection like turn the wrist to activate the backlight of the screen. Next to the accelerometer a magnetometer and an ambient light sensor is installed. The watch has no microphone. It can be connected via Bluetooth 4.0 LE (Low Energy) to Android devices from Android 4.1 and up. Next to Android it can also be connected to iOS devices running at least iOS 6 and up. Due to the slow hardware and the energy efficient display, one of the biggest pros of the Pebble Classic is the battery life of up to 7 days. As you can see in the picture, the Pebble Classic has a 2 color (black & white) e-ink display with a size of 1.26 inch and 144×168 pixel (178 ppi). The watch offers a 1-bit graphic and has only 128KB of RAM, which is significantly less, compared to the Gear S2, the Apple Watch or other Android watches. The installed RAM is used in the following way: 84KB are reserved for the operating system, 24KB for apps, 12KB for background worker and 8KB for app services. In total the watch offers 8 slots for apps or watch faces that can be installed with the Pebble Watch Android or iOS app.

The second edition of the Pebble smartwatches is the Pebble Time and the third version is the Pebble Time Round. Both editions have the new version of the operating system, Pebble OS 3.0, based on a timeline installed. The Pebble Time/ Round have also 4 buttons with the same function as the Pebble Classic. The up and down buttons on the right side are used to “scroll” through the timeline in the past or in the future. This feature will be described in the software feature section later in this post.

From a sensor point of view the Pebble Time/ Round offers 2 more sensors compared to the Pebble Classic. The following sensors are built in: Next to the sensors the Time/ Round is offering a microphone in order to reply to phone calls or messages. From a hardware point of view the Time and the Round based on the same hardware. Both have the 100MHz Cortex-M4 CPU installed, have 16MB of storage and a 6-bit graphic unit with 64 Colors. The Pebble Time has a square display with 1.25 inch and a resolution of 144×168 pixels with 182 ppi. The Pebble Time Round has a 1 inch display with a resolution of 180×180 pixels with 191 ppi. In order to connect the Pebble Time / Round with your iOS or Android device it offers as the Classic only Bluetooth 4.0 LE.

The watches can be used with iOS devices starting from iOS 8 and up, Android is supported from 4.3 and up. Furthermore, there is no restriction of apps installs anymore on the watches. The biggest difference between the Time and the Round is the form factor from a square to a round display. Besides that the Pebble Time Round is very thin with a height of 7.5 mm compared to 9,5 mm. However, due to the slim watch case, the Pebble Time Round offers only a battery life of 2 days compared to up to 7 days for the Pebble Time.

To get an overview of all Pebble watches and features you can check the following link and compare them with each other.

Since Pebble watches and the Pebble OS are pretty simple to use and have a very simple structure the system is not offering too many special software features compared to watchOS or Tizen OS. However, one of the biggest features that every tester must know from the Pebble operating system is the timeline. Until now the timeline is only available for the Pebble Time and Time Round, but Pebble already announced that this feature will also be available on the Pebble Classic very soon.

What is the timeline all about? The idea behind the timeline is that you don’t need to open a specific app e.g. a sports app to get the latest information about an event. Instead customers can open the Pebble Time app on the smartphone and “pin” the app to the timeline feature. Whenever there is an upcoming sports event, a customer can simple press the upper right button to get to future events. If an event was missed it can be reached with a click on the lower right button to get back into the past. This is a very nice feature and when testing an app for the Pebble OS 3.0 you should test again this timeline function, too. The following video provided by the Pebble team will explain the timeline feature.

In the last post of this series I will provide you with more than 40 test scenarios/ ideas to test smartwatch apps. These ideas might help you to start your testing activities for smartwatches including the Pebble OS.