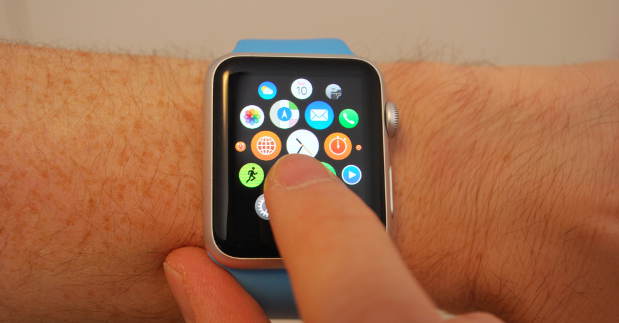 If you are new to Apple’s smartwatch and the new operating system it is very important to get started with the different development, UX and design guidelines. Apple provides some useful sources on their developer section page. It is a must read for everyone who is involved into smartwatch app developing, testing or designing for the Apple Watch.
As we all know, Apple has a high focus on very good product design. Because of that, Apple is providing the human interface guidelines for the Apple Watch. Next to the UX and design guidelines, some really nice videos and other examples are provided. The human interface guidelines can be found here.

Developing apps for Apple can be exhausting because of the app submission process. Every app that should be part of Apple’s app store, must pass the submission guidelines. Therefore, it is very important for you and your team, to know what kind of resources Apple needs from you in order to test your app. Furthermore, it is essential to know what kind of tests Apple will check, to perform those checks before submitting the app to them. If you are familiar with Apple’s submission process, you hopefully know the submission guidelines for iOS apps including the iPhone and iPad. However, there are some more checks you need to perform when your iOS app contains an extension for the Apple Watch. Apple provides a submission guide also for their smartwatch and it can be found here. If you are testing Apple Watch apps you must now the submission guidelines.

Until now, Apple has released the first version of the Apple Watch and other manufacturers who would be able to use the watchOS are not on the market and will probably never be. So let’s have a closer look at the Apple Watch.The watch offer basically 5 input/ navigation methods:

In the following picture you can see the Apple Watch with its input options. The digital crown is the small wheel on the right side and is the main navigation methods of the watch. The crown can be used to scroll through lists or to zoom e.g. into apps to start them. By pressing the crown you can activate the watch when the display is off. You can switch between the watch face and the home screen and you can return to the home screen when you are inside an app. If you press the crown for a short time it will activate Siri and you can use the voice control of the watch. By double pressing the crown users have the chance to switch between most used apps. Next to the swipe and touch gestures, the Apple Watch is offering the so-called force touch feature. The watch is also able to show more options, based on the pressure to the display. Depending on the app and its features the Apple Watch is providing a new dimension to interact with apps and is very important to know when testing Apple Watch apps. To see how force touch works, you can use this method to change the watch faces of the Apple Watch. Next to the digital crown, the Apple Watch has another hardware button. A single press on the button will open the friend screen to get in touch with up to 12 friends. By double clicking the button you can activate Apple Pay. However, if Apple Pay is not supported in your country the double click can not reconfigured to another function. When pressing the hardware button for a short time it will activate a screen to turn the watch off, or to put it into the power reserve mode. In this mode the watch will disable unnecessary functions to keep the watch alive for as long as possible. When the watch battery drops below 10% it will reach this mode automatically.

A very important feature for testers is the taking a screenshot feature from the watch. In order to capture a screenshot you must press the digital crown and the side button at the same time. This combination will save a screenshot in the photo app and the screenshot can be transferred to the phone and can be used for bug reports.
Like other smartwatches, the Apple Watch is offering a microphone to answer phone calls, or send/ reply to messages. A double press on the digital crown will activate Siri, to execute voice commands on the watch.

The last input method the watch is offering are sensors. The Apple Watch offers a heart rate, accelerometer, gyroscope and an ambient light sensor. The heart rate sensor is located at the back of the watch and can be seen at the following picture. It is used to measure the heart rate during a workout or for health apps. The gyroscope sensor is used to activate the screen whenever the wrist is turned to look at the screen. Moving the arm back will automatically switch off the screen again. Within the settings the watch is offering the possibility to configure the orientation for left or right-handers. This is important to know when testing your app for the Apple Watch. The accelerometer is used to measure the movement of the watch and the person who is wearing it. The ambient light sensor is used to measure the current light situation and to change the display brightness.

Like for other smartwatch operating systems, the Apple Watch requires an iOS app called “Watch” in order to install or to transfer data from and to the watch. The Watch app is preinstalled on all iOS devices who supports the Apple Watch. The app must be used to activate and to configure the watch and is the central hub to install, remove or configure apps on the watch. Furthermore, data can be send or received e.g. photos, mail, calendar data or sport activities. After the watch is configured, you can use it without a paired iOS device but this makes currently no sense, due to the limitations of the watch in terms of functions and features. However, using the watch without a paired iOS device is a perfect test case to see how the app handles the standalone situation.

WatchOS is offering plenty of software features that may have an impact to your app. The following list shows an excerpt of the features that you should know and use during your test sessions:

When you are testing for watchOS, I recommend you to rent or buy an Apple Watch in order to get familiar with all the different features and input methods that this system is offering. Reading and knowing all the guidelines is the key as for any other mobile or wearable platform on the market.

In the last post of this series I will provide you with more than 40 test scenarios/ ideas to test smartwatch apps. These ideas might help you to start your testing activities for smartwatches including watchOS.

The next post in the series will be about Pebble OS.